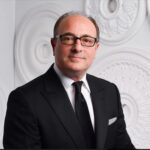 Martin Katz is Founder and President of Prospero Pictures. One of the most prolific feature film producers in Canada, Katzâs credits include Hotel Rwanda, which was nominated for three Academy Awards and three Golden Globe Awards, and Bronwen Hughesâ Stander, which the London Observer called âthe greatest heist film since Reservoir Dogs.â

Martin has a thirty-year history in all aspects of media production, finance and business affairs, including government relations. Prior to founding Prospero Pictures in 2003, Martin was President and Chief Operating Officer of Grosvenor Park Film Financing Corporation, while also running a feature film production company active in Toronto and London, UK.Â

An internet pioneer, Martin was employee number three at Microsoft’s MSN Canada where, as Executive Producer, he created the first episodic “web-umentary.” He developed and produced innovative interactive programming in both French and English in collaboration with Pulitzer Prize-winning author Carol Shields, celebrated director David Cronenberg and comedians Jean-Guy Moreau and Rick Mercer. He also created the first 3-D internet experience, a Halloween special based on the successful YTV kids’ series, Freaky Stories.

Originally from Winnipeg, Martin has lived, studied or worked in nearly every region of Canada as well as in Paris. Fluently bilingual, Martin holds degrees in law from the Universities of Toronto and Paris and has served as Professeur de droit at lâUniversitÃ© de Moncton and as Special Lecturer in Intellectual Property Law at the University of Toronto. Martin is a member of the Law Society of Upper Canada, a Director of the Institute for Canadian Citizenship, and Chair of the Academy of Canadian Cinema and Television.