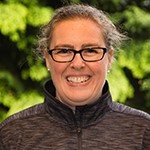 Originally from Montreal, Marie-Pierre Lavoie has lived in the West for 29 years, including 13 years in British Columbia. She is married and has two sons, William and Carter, both of whom attended Francophone school. Since their entry into preschool, she has volunteered her time with parents’ associations. Among other things, she has been president of the FÃ©dÃ©ration des parents francophones de B.C. (FPFCB) and also president of the Commission nationale des parents francophones (CNPF). Since October 2018, she is a school trustee and Chair of the Conseil scolaire francophone de la Colombie-Britannique. In 2017, she played an instrumental role in winning Victoria’s bid to host the 2020 Canadian Francophone Games. Her experience with the Francophonie does not stop with the education sector, as she is a translator by profession. In this capacity, she has held a number of positions that have taught her a great deal about the issues facing Francophone minority communities. In particular, she was in charge of translation at the Vancouver 2010 Olympic and Paralympic Winter Games and the 2017 Invictus Games in Toronto. As a volunteer, she has been part of the BC Mission Team at the Canada Games since 2017.