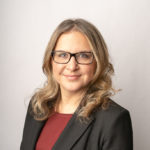 Ania learned French in an immersion program from Kindergarten to Grade 12 in North Delta, a suburb of Vancouver. Ania completed her first degree in Political Science and French Literature at Simon Fraser University, as part of the French Cohort Program, a multidisciplinary program offered primarily in French by the Faculty of Arts & Social Sciences. In 2011, Ania obtained her degree in Common Law and Civil Law from the University of Ottawa. Ania is a member of the bar of British Columbia, Ontario, and Newfoundland and Labrador. In 2014, she joined the Vancouver office of boutique law firm Juristes Power, after having worked for more than two years at a national firm. She practises law in French and in English. Her practice concentrates on civil litigation, public law, and linguistic rights. Ania offers strategic consulting to a number of public institutions, including French-language school boards across Canada. In her free time, Ania is pursuing a Masters in Education and Sustainable Development at the University of British Columbia. Ania speaks French, English, and Polish fluently.